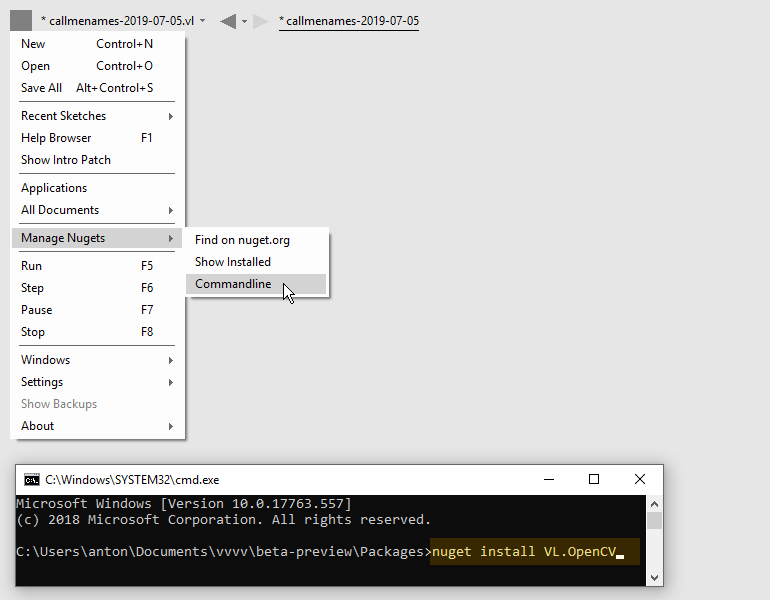 Opens a webbrowser and lets you search for NuGets in the online repository. Note that for now, after you've found what you're looking for, you'll still have to install a NuGet manually via the commandline.

Opens a file explorer at the path all your nugets are installed locally. By default this is in your users directory:

but can be changed using the commandline argument "nuget-path", see Commandline Arguments.

Opens a commandline from which you can run nuget commands.

Installing the latest version of a NuGet

To install the latest version of a NuGet simply run nuget install, like e.g:

After installing a NuGet via the commandline it is not yet automatically referenced by the current document! It is now merely available among the NuGets via the Dependencies menu. But if an installed NuGet contains any help files, those will already show up in the HelpBrowser.

To update to the latest version of a NuGet you have already installed, simply run the install command again. Your package directory can contain multiple versions of the same nuget and VL will always use the newest. Older versions have to be removed manually if no longer needed.

Sometimes you may want to install a "pre-release" version of a package. To install those, add the argument -pre when running the install command, like e.g:

Sometimes you may want to install a specific version rather than just the latest. In this case, use the -version argument when running the install command, like e.g:

VL will always load the newest version of a NuGet it finds installed. So in case you want to run a specific older version of a package, make sure you don't still have newer versions of it and its dependencies around.