Editor extensions allow you to extend the vvvv editor with your own tools. Examples of such extensions are:

Extensions can be entirely patched in vvvv and assigned a shortcut so they can be called by the user at anytime. You can find all currently loaded extensions in the main menu under:

Extensions are ordinary VL patches, with the one distinctive feature, that they are saved in a file ending in .HDE.vl, like:

Any such file that you have open in vvvv, is already running as an editor extension. You'll now most likely want to be able to invoke your extension by a shortcut or menu-entry. For this you'll have to register a command which you can do via the Command node that is available via referencing the VL.HDE nuget.

Or simply start from the template:

Creating an extension from the template

From the main menu choose:

and specify the destination and filename for your new extension .vl document in the file save dialog.

The filename must end in .HDE.vl in order for the file to be a valid editor extension.

This copies the template to the given destination and opens the document for you, which should look like this: 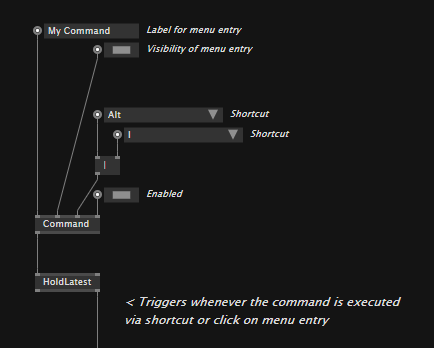 Note the Command node here that allows you to register a command with the editor, by specifying:

Now check the output of the Command that will trigger whenever the command is executed via shortcut or click on menu entry.

You take it from here. A classic usecase will be showing/hiding an editor extensions window on repeated executions of the command. But as within any other patch, you're free to run even format c: here, so as always, handle with care...

If that is what you need, then yes, simply register multiple commands in your document that trigger individual extensions.

Note though, that should one of your extensions have a runtime error, all the others running in the same document, might be affected as well.

An extension doesn't necessarily have to have a window at all (e.g. it could just run an operation on a bunch of selected nodes...). It can also have its very own idea of a window. But in many cases you'll just want to use a ready window that comes with VL.HDE. For now these two are available:

As of now there is no way to tab or dock multiple extension windows. Setting a windows bounds is the best we can do for now. Yes, with many extensions open, this will get messy. Let's see...

In order to set the initial window bounds when an extension window opens, set the Bounds input on the SkiaWindow nodes. For convenience checkout out:

The vvvv API gives you access to hovered and selected nodes and allows you to read and write pins.

For some extensions it will be interesting to have them configurable via the Settings. This is not yet possible though.

Packaging extensions in a NuGet

If you want to release a nuget that only contains an extension, its ID has to end in .HDE, e.g.:

which in turn requires the .vl document inside that nuget to be following the same naming and be called:

Extension as part of a NuGet

Extensions can also be included with any NuGet that primarily offers other functionality. In such a case, the name of the extension document has to be identical to the package ID but with the .HDE suffix added. For example a NuGet named VL.MyPackage would contain at least these two documents:

Especially during development it may happen that you crash an extension and it needs a restart. You can restart all extensions at once using the shortcut ShiftF9.